Famous Temples In Udaipur You Should Explore 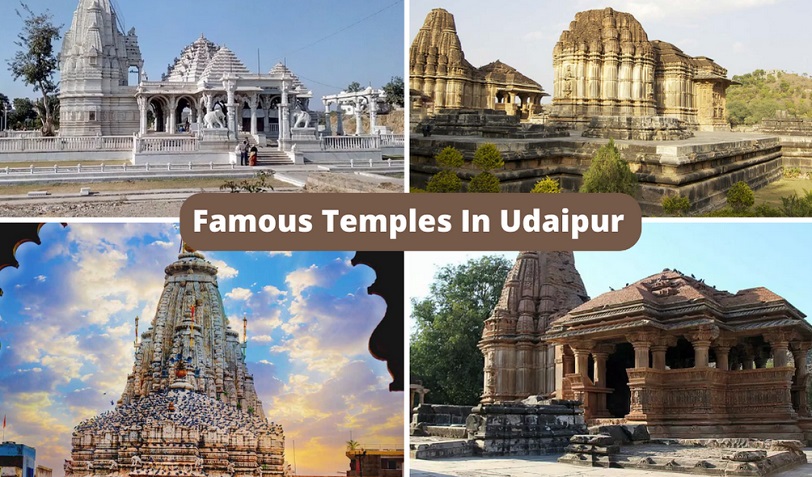 Udaipur, fondly known as the City of Lakes is one of the most revered tourist attractions in India, and rightly so. Stunning architecture, regal heritage, picturesque lakes, and a soulful cuisine reflective of the best of Rajasthani culture are not all that you can find in Udaipur. The city’s rich history also makes it home to numerous religious spots that are visited by thousands of devotees every day. Besides famous landmarks such as City Palace, Lake Pichola, and Saheliyo Ki Bari, there are several temples in Udaipur that bring you closer to your spiritual self.

Temples to visit in Udaipur are also architectural marvels that add to the beauty and culture of the city. So as you get ready to explore Udaipur, make sure to add the following list of temples to your itinerary.

One of the most famous temples in Udaipur, Mahakaleshwar Temple is located near the Fateh Sagar Lake and is dedicated to Lord Shiva. Believed to be almost 900 years old, the temple has beautifully carved architecture and the peaceful Aravallis as its background. The Shivalinga at the temple is carved out from a huge black limestone and as per local folklore, Guru Gorakhnath a popular saint and Shiva devotee worshipped here. The Rudrabhishek Aarti attracts a large number of devotees to the temple which also houses several small shrines dedicated to Hindu Gods in its compound.

Dedicated to Lord Vishnu, Shree Jagdish Temple is a three-storeyed marvel made in an Indo-Aryan architectural style complete with a pyramidal spire that is 79 feet tall and is topped with intricate sculptures, a porch, and a mandap. The temple is located just outside the famous City Palace and was built by Maharana Jagat Singh in 1651. The sanctum containing the main shrine which has a four-armed image of Lord Vishnu in black stone and has four smaller temples surrounding it is reached after climbing 32 steps.

Shri Manshapurna Karni Mata Temple is dedicated to Karni Mata who is said to be the human incarnation of Goddess Durga. Although the temple was built in 1628 by Maharana Karan Singh, it remained in ruins until 1994 when it was restored to its former glory. The temple is located on Machala Magra Hills and is reached via a ropeway. Legend has it that feeding the rats on the premises grants you good fortune in the future. Owing to its location, the temple offers you picturesque views of the surrounding areas that are best enjoyed during sunset.

Eklingnath Ji temple in Udaipur is believed to have been built in 734 AD by the ruler Bappa Raval and is dedicated to Lord Shiva. One of the oldest temples in Udaipur, Eklingji features a two-storeyed architecture complete with a magnificent pyramid-style roof and an intricately carved tower. The main mandap houses the four-faced idol of Lord Shiva which is almost 50 feet tall and constructed out of black stone. The idol depicts the four forms of God and is encircled with figures of Goddess Parvati, Ganesh, and Kartikey.

Believed to have been constructed by Maharana Shambhu Singh, Mahalaxmi Temple is dedicated to Laxmi, the Goddess of wealth and prosperity, and is the family deity of Shrimali Samaj. The temple sees a large influx of devotees, especially on the occasion of Diwali and Goddess Laxmi’s birthday which is celebrated on the eighth day of Shraddha Paksha. The temple features stunning architecture and is visited by thousands of devotees every day.

Famously known as the Sas-Bahu temple, Sahastrabahu Temple refers to Lord Vishnu and translates to the one having a thousand hands. The temple is located on the ancient site of Nagda and is said to date back to the 9th -10th century. Featuring intricate carvings, the temple structures are a part of the list of heritage sites of the Archaeological Survey of India. Sahastrabahu Temple symbolises a harmonious relationship between a mother-in-law (Sas) and a daughter-in-law (Bahu) owing to the legend that King Mahipala of Kachchhwaha Dynasty built Lord Vishnu temple for his wife and later his son built Lord Shiva Temple for his wife.

As you set out to plan your trip, make sure you stay at a location that is well-connected to all these sites so you can make the most of your time here. Well connected to famous spots and heritage sites, The LaLiT Laxmi Vilas Palace Udaipur is one of the finest 5-star hotels in Udaipur offering the best of luxury, comfort, and grandeur as you spend time with your loved ones.

So, what are you waiting for? The City of Lakes awaits you!