Famous Temples Of Bangalore To Add To Your Travel Itinerary 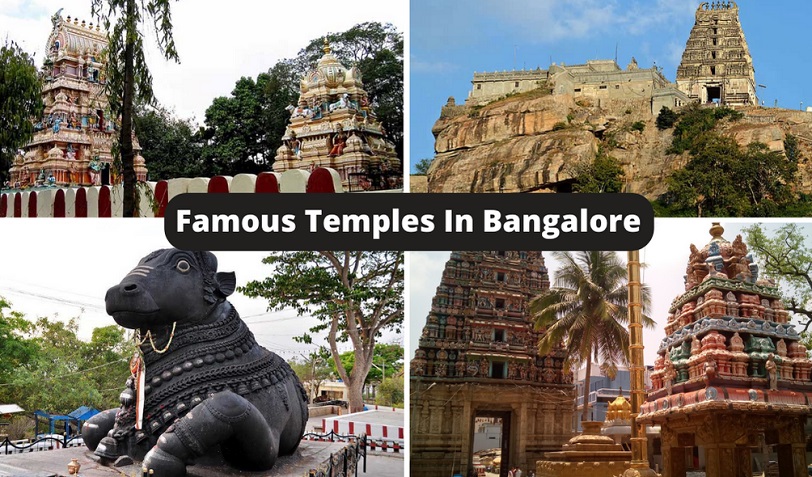 Bangalore, famously known as the IT capital of India has much more to offer than just the latest in technology and the corporate world. The city has a rich history and culture which is embodied thoroughly in its stunning architecture, landmarks, temples, and people. While Bangalore continues to develop at a supersonic speed, it is still in touch with its deep-rooted culture and history and attracts thousands of visitors every year. Besides being home to renowned attractions such as Bengaluru Palace, Lalbagh Botanical Garden, and Tipu Sultan’s Summer Palace, the city also has various religious sites and pleasant weather all year round making it as much of a tourist destination as it is preferred as a corporate hub.

You can best explore the city’s rich heritage by taking a trip to the famous temples in Bangalore. While some temples of Bangalore exhibit the traditional Dravidian style architecture most beautifully, others have a modern architectural style that should not be overlooked on your visit to the city. To help you plan your travel itinerary, we have created a list of the best temples in Bangalore that will instantly connect you with your spiritual side and at the same time will leave you amazed by their stunning architecture.

As one of the old temples in Bangalore, The Chokkanathaswamy Temple is said to be built in the 10th century by the Chola dynasty. The temple is dedicated to  Lord Vishnu and is renowned for its magnificent architecture which features Tamil inscriptions. Located in Domlur, the temple exhibits stunning statues and large pillars, one of which has Lord Vishnu’s Dashavatharas (10 forms) etched into it.

Built by the former king of the Vijayanagara Empire in 1537, Dodda Basavna Gudi is located in the South area of the city and is one of the most famous temples to visit in Bangalore. The temple features a Dravidian style of architecture and has a magnificent granite statue of Nandi (sacred bull) sculpted from a single rock. The Kadalekaye Parishe Festival (groundnut fair) held in the Hindu month of ‘Karthika’ lights up the temple with devotees from across the country visiting to offer groundnuts to the deity.

Located in the Dodda Basavana Gudi temple complex, Dodda Ganesh Temple also called Shakthi Ganapathi temple is one of the most famous temples in the IT city. The temple has one of the largest monolithic Ganesha statues which measures 18 feet in height and 16 feet in width. One must visit the temple during Ganesh festivities when the statue of the Lord is decorated in different avatars. The most famous avatar is the Benne Alankara when the statue is covered with 100kg of butter.

Dedicated to Lord Shiva, Gavi Gangadhareshwara Temple features an Indian rock-cut architecture and is built into a naturally occurring cave. The temple is believed to have been built by the ruler Kempe Gowda 1 in the 16th century. The highlights of this temple include the rare idol of the Fire God, Agni, stone discs in the front compound, and an inner sanctum that receives sunlight directly on the Shiva Linga only on the occasion of Makar Sakranti, once a year.

Featuring a classic Dravidian and Vijayanagara architecture style, Kota Venkateshwara Temple was built in 1689 by Chikka Deva Raja, the ruler of Mysore, and is dedicated to Lord Venkateswara. The temple is located next to Tipu Sultan’s summer palace and attracts thousands of devotees from all over the world. Featuring beautiful carvings and inscriptions, the temple walls are adorned with carvings of Lord Brahma, Shiva, and Vishnu.

Dedicated to Shakhambari an incarnation of Goddes Parvati, Banashankari Temple was built in 1915 and has a simple architecture unlike other temples of the city. One of the most unique aspects of this temple is the fact that devotees hold special prayers for the temple deity on Rahukaal which is considered to be inauspicious amongst Hindus. The temple hosts the festival of Banashankri Jatree in January or February, the feast day of the Goddess on September 13th, and Dussehra.

Located near Ulsoor Lake, Someshwara Temple was built by the rulers of the Chola dynasty and is said to be almost 1200 years old. The temple has beautiful architecture reflective of the Vijayanagara style and the tower at the entrance has inscriptions and carvings of Gods from Hindu mythology, animals, and other figures. The temple premises also has 48 pillars with carvings of deities and the Navgraha Temple which is believed to house statues of twelve rishis.

Experience the purest form of tranquility by taking a trip to these temples in Bangalore. They are bound to leave you mesmerized by their stunning architecture and positive vibes.