Mysore Palace: All You Need To Know About This Royal Structure 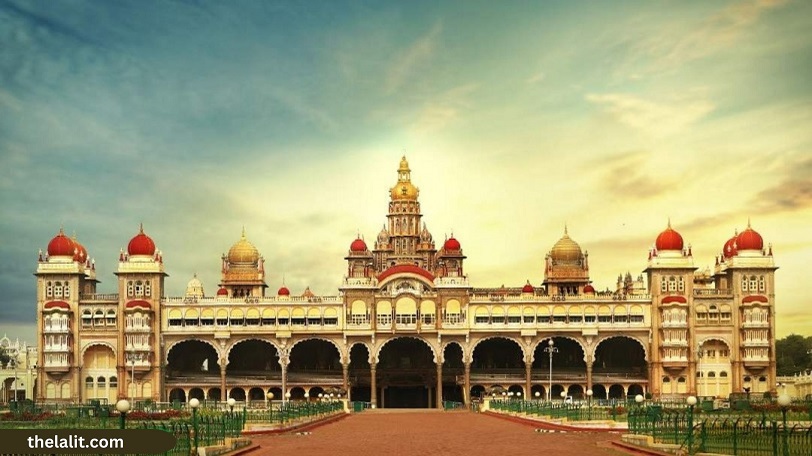 An ancient town on the foothills of Chamundi Hills, Mysore is also called Mysuru and is famously known as the City Of Palaces. The city owing to its rich history, splendid architecture, sandalwood goods and silk sarees, attracts thousands of visitors from all over the world. Besides being home to one of the largest palaces of India, the Mysore Palace, the renowned city of Mysore, also has several temples, churches, a lake and gardens for its patrons to explore and make the most of their time.

Synonymous with the term ‘grandeur’, Mysore Palace, also called Mysore Aramane, and Amba Vilas Palace, is one of India’s largest edifices. The palace was home to the Wadiyar Dynasty, which ruled Mysore from 1399 to 1950. The palace reflects the best Indo-Saracenic architecture and is also a UNESCO World Heritage Site. The exemplary architecture and rich history of Mysore Palace make it a top attraction not just in Karanataka but also in the whole country.

If you are planning to visit Bangalore soon, then be sure to pack in a trip to the regal Mysore Palace which is just a short 3-hour drive away. Whether you love discovering different architectural styles or are an ardent history enthusiast, Mysore Palace is packed with both and offers an unforgettable experience.

While the city of Mysore is dotted with several palaces, none of the structures come close to the splendour of Mysore Palace. As the residence of the Wadiyar Dynasty for almost 600 years, the palace has a rich history attested to it and has been built and rebuilt several times. As per history, it is believed that the first ruler of the Wadiyar dynasty, Yaduraya Wodeyar built the initial wooden structure. The palace was rebuilt in 1638 when it was struck by lightning and then again in 1793 AD when Tipu Sultan overtook the ruling dynasty.

Sadly, a fire during the wedding ceremony of Princess Jayalakshmmanni destroyed the palace in 1897. As we see it today, Mysore Palace was commissioned by Maharaja Krishnaraja Wodeyar IV and his mother, Maharani Kempananjammanni Devi, to a British architect Henry Irwin. This revamp was completed in 1912, and another expansion project in 1930 by Jayachamarajendra Wadiyar added the Public Darbar Hall Wing to the Mysore Palace.

Mysore Palace is built in an Indo-Saracenic architectural style and exhibits a culmination of Hindu, Mughal, Gothic and Rajput elements. Grey granite makes up the three-storeyed palace building and 145 feet five-storeyed towers while deep red marble adorns the domes of the Mysore Palace.

The main palace is built amidst beautifully landscaped gardens. It has an intricately articulated elevation complete with bow-shaped canopies, curved arches and bay windows made in various styles, including Hindu and Byzantine. The exteriors of the palace also feature two durbar halls. The palace’s interiors are equally quintessential and have several aspects enriching it, such as stained glass ceilings, carved doors, Czechoslovakian chandeliers, shiny tiled floors, sprawling pavilions and artwork from across the world.

Above the central arch of the palace facade is a beautifully designed structure of Goddess Gajalakshmi (Goddess of wealth and prosperity) with two elephants beside it. The architecture of this palace is truly majestic and should not be missed. 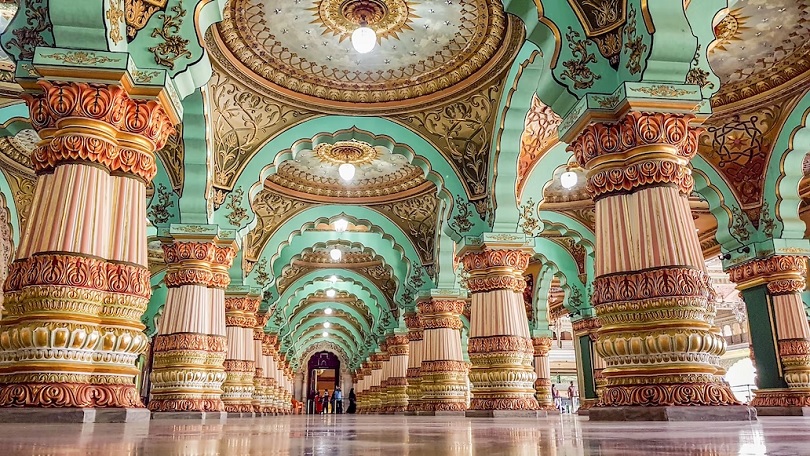 Mysore Palace timings are from 10:00 AM to 5:30 PM, while the Mysore Palace entry fee starts at INR 100/- for Indian and foreign adults and ₹ 50 for kids above ten years and below 18 years. The illumination timings for the palace are between 7:00 PM to 8:00 PM except for Sundays and public holidays.

Mysore Palace also has a light and sound show showcasing the history of Mysore. The show lasts 45 minutes and takes place in Kannada from Monday to Wednesday – Time 7.00 PM to 8.00 PM and Saturday – Time 8.15 PM to 9.15 PM. The English show takes place from Thursday to Saturday from 7:00 PM to 8:00 PM. The entry fee for the show starts at INR 100/- for adults and INR 40/- for children.

Some of the most exciting attractions of Mysore Palace include:

The regality of the Mysore Palace is unmatched and should be witnessed by all at least once in a lifetime. If you plan to visit the palace from the IT Hub of India and are looking for the best hotels in Bangalore, then book your stay at The LaLiT Ashok Bangalore. Our exceptional service and 5-star facilities will add luxury and comfort to your travel.