5 Forts In And Around Udaipur You Just Can’t Miss 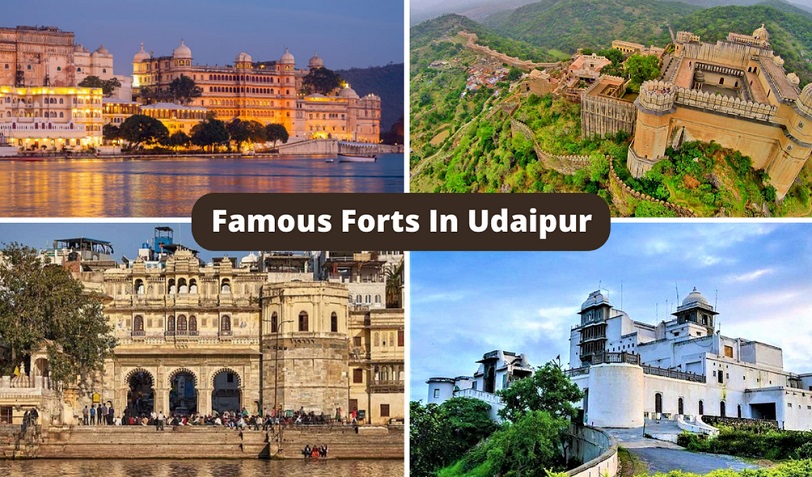 Also known as ‘Venice of the East’, Udaipur is a place like no other in India. Home to some of the most beautiful lakes and forts, the city has rightly earned its spot as a top tourist destination. Besides the abundance of lush green Aravallis and mesmerizing water bodies, Udaipur also holds a lot of cultural and historical significance. It was founded in the year 1553 as the capital of Mewar Kingdom by Maharana Udai Singh II and since then has undergone splendid development that has bought about how it is today. While the architectural grandeur of the city remains unparalleled, the tranquillity it holds within attracts visitors from all over the world.

Udaipur has plenty to offer to its patrons including historic landmarks, natural highlights, religious excursions and more. However, its forts and palaces tend to stand out amidst it all owing to their regal architecture, peculiar locations and history.  Not only are these royal homes present in the city, but also around it. To offer you a glimpse of the city’s grandeur, we have compiled a list of the most spectacular forts in Udaipur that are a must-visit.

One of the five hill forts of Rajasthan which were declared UNESCO World Heritage Site in 2013, Kumbalgarh Fort is an architectural marvel located in the Rajsamand district. The fort has a wall stretching over 38km, making it the second-longest wall after The Great Wall of China. Built by Rana Kumbha in the 15th century, the fort’s strategic location amidst the isolation of the Aravallis made it a safe hiding spot for the Mewar kings and currently, the forest around the fort has been converted into a wildlife sanctuary. The long fort wall has several attractions within itself including the Badal Mahal, Kumbha Palace, baoris, chattris, water reservoirs, around 300 Jain temples and 60 Hindu temples and was also the birthplace of the famous Mewar ruler, Maharana Pratap.

City Palace located on the east bank of Lake Pichola is a revered tourist attraction and one of the most famous forts in Udaipur. Built by Maharana Udai Singh II in the year 1553, the grand structure is the largest palace complex in all of Rajasthan and is made completely of marble and granite. The palace’s architecture draws inspiration from Rajasthani, Mughal, Chinese and European styles and the complex itself has abundant attractions including the Badi Mahal, Amar Vilas, City Palace Museum, Jagdish Mandir, Chini Chitrashala, Durbar Hall, Sheesh Mahal and Fateh Prakash Palace. You can revel in the mesmerizing views of Lake Pichola and the entire city from the upper levels of the palace. Make sure to check out all the unique features of this palace by giving it a priority spot on your itinerary that it rightly deserves.

Popularly called the Monsoon Palace, Sajjangarh Fort draws inspiration from its name from Mewar dynasty ruler, Maharana Sajjan Singh. The 19th-century fort is located on top of Bandsara Hills just 7.8 km away from Udaipur and offers spectacular views of the city. Sajjangarh Fort was built atop the hills by the Mewar ruler as an observatory to watch the approaching monsoon clouds and to be developed into an astronomical observatory. However, the Maharana’s premature death halted the plan and the fort proceeded as a shooting spot for the royals. While you are here, you can enjoy the stunning views of the lakes, palaces and Aravalli Hills that enhance the beauty of the city.

One of the most marvellous forts in all of India, Chittorgarh Fort is a UNESCO World Heritage Site built by local Maurya Rulers. Built on an elevation of 590 feet and spread over a massive area of 692 acres, Chittorgarh is reflective of the sacrifices made by Rajput kings and queens and is an epitome of the intricate Rajasthani architecture. The fort premises house numerous water bodies including step wells and ponds due to which it is also known as the Water Fort. Some unmissable attractions of the fort are the Vijay and Kirti Stambh, Padmini Palace, Rana Kumbha Palace, Gaumukh Reservoir, Fateh Prakash Palace and Kalika Mata Temple. While your visit here, you can also enjoy a light and sound show which happens after 7 PM.

Located on the Gangaur Ghat of Lake Pichola, Bagore Ki Haveli was built by Amar Chand Badwa who was the prime minister of Mewar in the 18th century. The landmark went through a restoration process and is now a famous museum. The architecture of the haveli is reminiscent of the Mewar culture and features huge jharokhas, courtyards, fountains and decorative archways. The interiors are equally mesmerising and feature intricate mirrorwork, mural paintings and glasswork. You must visit the Chambers of The Royal Ladies which is renowned for its beautifully painted windows. The haveli also hosts cultural events including dance and music shows to help you witness the regal Rajasthani lifestyle.

Explore the best of history and architecture by taking a trip to these splendid landmarks of Udaipur and we are sure you won’t be disappointed!

Previous Post Kutch Rann Utsav: All You Need To Know About This Vibrant Festival
Next Post 5 Amusement Parks To Visit In Bangalore For A Fun-Filled Time