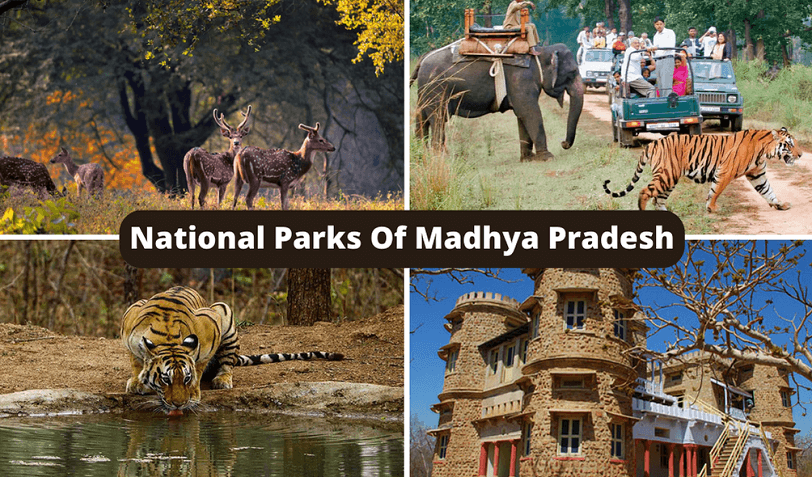 Madhya Pradesh is a culmination of culture, heritage, history and nature. Known as the ‘Heart of India’, the state is home to numerous monuments, intricately carved temples, forts, palaces and equally incredible natural beauty. The state has almost 12 per cent of India’s forest cover and features a rich flora and fauna to account for it. The national parks of Madhya Pradesh along with its tiger reserves house a variety of animals including rare and endangered species such as the Indian White Tiger, Indian Bison, Royal Bengal Tiger and Blue Bull.

National Parks in Madhya Pradesh offer a panorama of wildlife for you to sit back and enjoy. Taking a safari amidst these forests is thrilling and relaxing in equal measure. Here is a list of the most famous national parks of Madhya Pradesh that you should visit on your next trip to the state:

Deriving its name from the Satpura Hill ranges, Satpura National Park is spread over 1500 sq. km and its forests are important tiger conservation zones. The park is home to India’s national animal, the royal Bengal tiger besides other exotic animals including sloth bear, Indian bison, Asiatic wild dog, four horned antelope and also the near-extinct Malabar squirrel. Besides taking a safari ride, you can also enjoy a boat safari, try camping in Denwa River backwaters or visit its villages to shop for local handicraft items.

Located near the historic Bandhavgarh Fort, Bandhavgarh National Park is a renowned tiger reserve with the highest population density of the royal Bengal tigers. While taking a safari here, spotting tigers is a common phenomenon, making it a must-do activity for wildlife enthusiasts. Besides tigers, this national park has a rich green forest cover and is home to more than 22 mammal species and 250 plus types of birds. You can also visit the ancient city of Khajuraho which houses the world-famous Hindu and Jain shrines renowned for their intricate architecture and carvings.

A part of Project Tiger, Pench National Park is spread over an area of 750 sq. km that is home to a variety of animals such as tigers, Indian leopards, wild boars and more. The park has a spectacular landscape with the Pench River flowing through it. The river and lush green grasslands also attract more than 300 species of rare local and migratory birds making it a bird watchers paradise.

Covering an area of 570 sq. km., Panna National Park has the river Ken running through its woody landscape which offers the perfect environment for animals such as leopards, tigers, antelopes, deers, over 260 types of birds and a variety of reptiles. Besides going on a safari, you can also enjoy boating over Ken, a hike to Pandav and Pahen Waterfalls and elephant rides.

Slightly smaller and lesser known, Sanjay-Dubri combines a national park and a wildlife sanctuary. This park is visited primarily for the sighting of various species of deer including the Indian Barking Deer and features a rich flora and fauna. The park also has a variety of reptile species due to its damp deciduous landscape.

Among the famous national parks of Madhya Pradesh, Kanha National Park is ranked as one of the best in Asia and is the only home to the Indian swamp deer also known as ‘Barasingha’ which was poached for its exotic meat. Besides providing a safe breeding ground for Indian Barasingha, the park also has tigers, leopards, wild dogs, and more. This picturesque park was an inspiration for Rudyard Kipling’s The Jungle Book.

Madhav National Park has served as a hunting ground for Mughal rulers, Maratha kings and various other royals. However, today it protects a variety of animal species. The park is made up of wetlands and forests and is also home to Sakhya Sagar lake where you can enjoy a crocodile safari. Animals including antelopes, leopards, foxes and a variety of birds live here. Besides wildlife safari, you can also explore George Castle, Tunda Bharka springs and the Churanchaj ancient wall paintings here.

Madhya Pradesh has a lot to offer to all its visitors. Explore its endless beauty with a luxurious stay at The LaLiT Temple View Khajuraho which also has one of the best  5 star restaurants in Khajuraho. As one of the best hotels in India, we aim to provide you with world-class hospitality, opulent amenities, and a memorable getaway experience.